TIES ARE OUT – BROTOX IS IN

Make an appointment for Dad, and give him an unforgettable gift of Botox!

Keep dad looking youthful with a couple shots of Bro-tox.
Most guys don’t put their appearance at the top of their list; so ladies, do it for him! Take the first step and make him an appointment, or even purchase units of Botox ahead of time. Call 713-622-2277 to make a FREE consult for DAD! Botox for dad is only $11 per unit *for a limited time* this summer!

An increasing number of men are adding “BROTOX” – or – Botox for men to their Father’s Day wish lists this year. While in the past many cosmetic and “anti-aging” procedures were felt to be primarily only for women, manly “BROTOX” is quickly growing in popularity for those like-minded men who wish to remain vital and youthful looking in an increasingly competitive world.

According to Men’s Fitness magazine; the number of men choosing to get Botox injections has risen 258% over the past ten years alone. These popular injectable treatments improve the appearance for those men who have wrinkles or frown lines that cause them to appear permanently tired or angry; and do not require any downtime like a facelift: which requires a recovery time of up to two weeks away from the office.
.
According to a recent study by the ASPS (American Society for Plastic Surgery) minimally-invasive cosmetic procedures for men such as Botox and filler injections like Juvederm have greatly increased in demand, and this may be in part due to a little “encouragement,” hints, suggestions, or inspiration from concerned wives or girlfriends; as well as the desire to remain both attractive to their partners as well as gain an edge up on their younger colleagues.

ICYMI – IN CASE YOU MISSED IT: Remarkable write ups and interviews! Meghan Markle plastic surgery look-a-like Xochi is really making her ‘mark’ this month appearing internationally on such sites as Entertainment Tonight, https://www.etonline.com/meet-the-woman-who-spent-30000-on-plastic-surgery-to-look-like-meghan-markle-and-see-her-results Telemundo, Daily Mail, the Mirror, the Sun, the New York Post, and our friends at ABC Nightline.  Xochi G., 36, from Houston, Texas, has undergone… 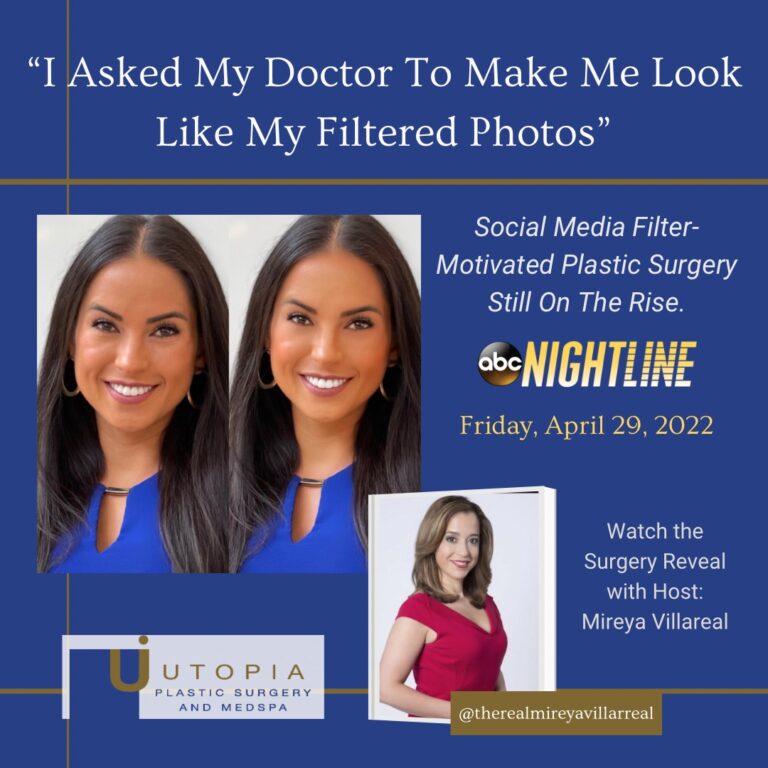 Social Media Filter-Motivated Plastic Surgery Procedures Still on the Rise! HOUSTON, TX – Being “Instagram-ready” just leveled up! An increasing number of women have started seeking to look more like the beauty filters used on popular social media apps like Instagram and TikTok. Watch the video on YouTube as aired on ABC Nightline: https://youtu.be/4-U3WjlBtfU ORIGINAL…

A look back at the Bayou City’s most unforgettable residents of the year By Amber Elliott Dr. Franklin Rose noted among the Houston Chronicle’s most fascinating headliners of 2018 Read the stories of the Houstonians in the spotlight in it’s entirety in the Houston Chronicle >> Read more HERE << link to https://drfranklinrosemd.com/dr-franklin-rose-named-among-houston-chronicles-best-of-2018/

Facelifts for Men at Utopia Plastic Surgery Men Increasingly Turning to Cosmetic Procedures to Remain Competitive in the Workplace Our patient, a prominent attorney in his mid-50’s, Mitchell Katine who has argued before the United States Supreme Court, came to Dr. Franklin Rose looking for a more youthful appearance while still maintaining a natural look. He underwent…

Watch the video as recently aired  ^^ click the link ^^ UPDATED: Worried about wrinkles? 20-somethings are now getting preventative Botox At 24 years old, Instagram model Casandra Martinez is a Botox veteran. Author: Stephanie Whitfield April 29, 2019 HOUSTON — In 2019, more and more people are making a living off their looks. Casandra Martinez…